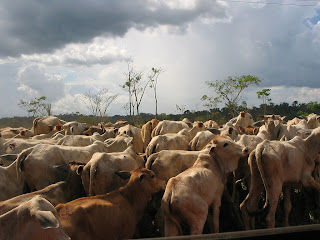 This week, the EU decided to (again) ban beef imports from Brazil, on the basis that the nation’s beef producers weren’t doing enough in its hoof-and-mouth disease inspections to ensure beef safety. By most Brazilian accounts I’ve heard, the gesture is much more about European protectionism than about legitimate health and safety concerns about Brazilian meat.
But the affects are more wide-reaching: with this major export market closed, now Brazilian meat prices will fall. And with falling prices, ultimately, there is less incentive for ranching to take place.

One region in Brazil is particularly notable for its relationship to the Brazilian beef industry, which has grown since 1990 levels of domestic-only production to today being the world’s largest beef exporter. 80% of that growth has taken place in Amazonia.

It’s important to remember here that Brazilian cattle ranching, unlike North American or European ranching, is based on a grass-fed approach, so the Brazilian ranches consume lots of land-although the beef may taste better, its level of productivity per hectare is very minimal- only 1 head of cattle per hectare. In the Amazonian context, ranching, which is responsible for 78% of forest destruction, all-too often involves making unviable small-scale family farming, rural violence (slavery, human rights abuses stemming from illegal land claiming), and also the significant environmental damages (carbon emissions, biodiversity loss, soil deterioration) caused by the clearing of the rainforest. The system is so intensive on Amazonian lands that pastures generally turn infertile in 10-20 year time horizons, making for a predatory model of ranch expansion. Also significantly driving the process is the fact that Brazilian land ownership is still “unregulated” – that is, the government doesn’t really know what lands belong to whom, and with enormous problems of falsifying land titles, land can be bought illegally for incredibly cheap prices, and turned into pasture before the bureaucratic environmental agency (IBAMA) and land reform agency (INCRA) have time to react.

Before laying full blame on Brazil though for Amazonian forest destruction, it’s important to remember another major driver in the process is the international market. Heavy agricultural subsidies in developed countries depress commodity prices internationally. Together with trade barriers, the subsidies (think: absurdly subsidized corn in the U.S., which feeds most American beef) forces developing countries to expand their agricultural frontiers, so that they can cope with unfair competition in international markets. Chicago Public Radio’s Worldview Program had a great interview about food subsidies (especially Ethanol) the other day (and I am featured on the first half of the show talking about other stuff).

Meanwhile, the demand-side of the equation is stunning: the New York Times reported this week that global levels of meat consumption have quadrupled since 1961. There are now 284 million TONS of meat in the world; the average person in the world is eating twice as much meat now than fourty years ago. These statistics also made my eyes bulge:
“…an estimated 30 percent of the earth’s ice-free land is directly or indirectly involved in livestock production, according to the United Nation’s Food and Agriculture Organization, which also estimates that livestock production generates nearly a fifth of the world’s greenhouse gases — more than transportation.” 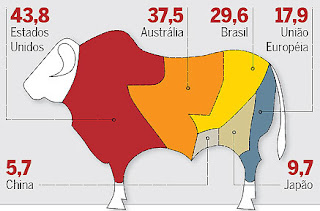 If each person in the U.S.was to cut back meat consumption in the U.S. by 20%, it would be the equivalent in terms of greenhouse gas emissions of switching from a normal sedan to a Hybrid car. E.O. Wilson (famous biologist and Harvard professor), contends that we could feed a world population of 10 billion (estimates are we’ll get there by the end of the century, at this rate) world if everyone turned vegetarian.

I’m sure we can do more to moderate meat consumption, but a whole-world-gone-vegetarian scenario is probably not to likely considering the sort of innate joy I see in many peoples’ eyes as they chomp into a hamburger or relish in Brazilian churrascerias’ all-you-can-(m)eat approach. So what else can be done? Some Brazilians are arguing for slaughterhouses to have greater rigidity in the standards of meat they accept; cattle from ranches with environmental fines or links to illegal land claiming simply could not be accepted. Other proposals from Brazilian environmental researchers propose changing the model of ranching that is done to one involving agro-ranching-forestry, wherein farmers would both grow their own grains, replant forest, and raise cattle in a rotational system, estimated by some to quadruple the productivity of land needed for ranching, and eliminating the need to clear trees to make way for cows.