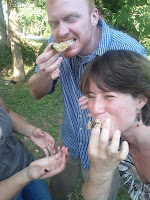 Yesterday we installed the two honey co-op hives at our new location on American University’s campus. The location is out in the far end of campus, near the Kreeger building and bordering the Korean Embassy grounds.

A nuc is basically a starter colony – it consists of five frames of bees, with lots of brood on the frames, and a queen. (Prior video from May is my installing a package – three pounds of bees – no frames, no brood).

One nuc was successful; the bees had built out nice foundation, there was plenty of capped brood and all looked healthy.

The other nuc was a different story altogether. The bees had built up their nuc so much that they had basically overheated, to their own demise. The frames were heavy with honey, and fell off the frames inside the nuc box, as you can see in this video. Loads of honey in the honeycomb, but unfortunately loads of dead bees along with it. We’ll be getting a new nuc installed again in the hive very soon, so no need to worry. 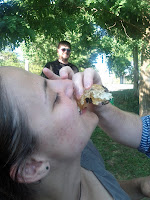 Making the best of it, Honey Co-Op members who were present at the installation at least sampled some of the honey from the honeycomb. It was delicious; complex and rich flavors; hints of azalea and cherry. And dead bee. yummmyyy…!

← Bees for Development
WSJ Article On the State Of the Honeybee →