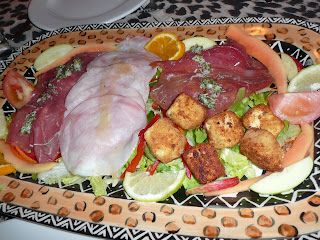 The market demand for a certain menu that exotifies African food have largely come about in the past 10-15 years; namely, since Apartheid fell and tourists took an interest in South Africa. With this demand, increasingly game meats are being imported to from Nambia. With increased tourism, game parks are also becoming popular here – areas that were former lamb farms are being converted for use as game parks, so that tourists can hunt animals for putting their stuffed heads onto living room walls the world over. (This, to me seems totally disgusting and intuitively, I expected it to be something that went out of style alongside ivory from poached elephants, but apparently, it is still alive, well, and a growth industry!) As the lamb farms get fewer, the price of lamb increases, and lamb, formerly one of the staples of peoples’ diets here, becomes a bit more rarely served on peoples’ tables. Ostrich meat, though still expensive, is increasingly an option at one’s local butcher shop. As one butcher told me, “people are increasingly mindful about having less fat on their meat, because of the high cholesterol; but still, out in rural areas, people love a good fatty piece of meat.” Barbeque’s (called braai’s here), which generally involve beef and chicken, continue as ever-popular staples of how laymen South Africans eat.

’s contrasts between racial and economic social exclusion are ever-present to me as a visitor here. In restaurants in the City Bowl, more often than not the servers are black or “so-called coloured,” while all the clientele are white. Especially in “African restaurants” – places that cater towards tourists that serve a lot of wild game meat on their menu, this more often than not is the case. The places sell a vision of African-ness quite different from the braai’s of the townships, the fried chicken so commonly served on tables in the black townships, or the curries and stews found in the quarters of the city. Likewise, these restaurants made for the tourist gaze neglect the common cuisine of most white south Africans, which includes scones, fish n’chips, soups, and pasta dishes. Instead, tourists can leave with a story of African food as bushmeat, sometimes in a curry or other times lightly seared, as a memorable experience to tell their friends back home about. I tended to scorn this selling – and marketing – of African “authenticity,” in restaurants. It seemed like such a false, distanced experience from the food I was getting to know in peoples’ homes and in lower and middle-class restaurants for non-tourists in the townships and in the city bowl that even my penchant for having new wild foods experiences was kept at bay.

Marco’s , however, gave me a good pause for consideration and reflection of my instinctive resistance, and I did, eventually, succumb to trying some new meats. Marco’s is a Cape Town restaurant that serves, among other items, a delicious carrappacio appetizer of lightly smoked Springbok, Ostrich, and Crocodile (over a bed of mixed greens, with delicate slivers of papaya, orange, apples, and peppers, with a hint of lime). Marco, a tall man with a winsome smile and strong handshake, has much to be proud of in his place. He’s the only black owner of one of these “African” restaurants, of which there are more than twenty, in Cape Town, and he’s come a long way as a restauranteur since his days as a kid working in kitchens, and doing take-away dishes from a storefront in Seapoint, before he could even own his own place in town because of apartheid’s oppression. There’s live African music there every night, and frequently, like at most African restaurants, a bus of tourists will come in for a night of feasting on the “typical” African cuisine.


Marco sticks by his principles, and remembers that even though you get a good market from tourist consumption of wild game (Impala, Kudu, Warthog, and Crocodile are just a few of the possible selections) an “African” place should also remember to serve the “real” classics; pap and beans (pap is a maize dish, similar to hominy), tripe, cow tongue, sheep’s head (“smiley”) chicken wings, ox-tail soup. Sometimes people think it’s uncouth to serve these humble dishes alongside the fancy exotic dishes the tourists seek; but Marco’s response is that it’s about being true to one’s self. At first I didn’t understand why he left pasta dishes on the menu: what kind of tourist would go to an “African place” for ravioli? But then I understood; the brilliance of Marco’s place’s authenticity was that it offered these dishes not so much as a gesture to the unadventurous tourist, but rather, for the average who wanted to come and enjoy a more “normal” meal in a great atmosphere. Keeping these classics on the menu is what keeps the place one of the few restaurants in this city where people of all skin-colors sit at its tables. The meats are Halal-certified, so even the community, which is prevalent in the neighborhood, can frequent Marco’s place.

Meanwhile, as tourism in continues to grow, the orientalism present in creating the idea of authentic “African food” continues to become more embedded as well. At least at Marco’s place, the market demand for these meats is acknowledged, but is done in a way that still allows for the average tripe-lover to be celebrated and to still have a seat at the table. I won’t be eating springbok again, nor crocodile, but I’m likely to come back to Marco’s because of the inclusiveness I sensed at the place.