For my writing on the campus fossil fuel divestment movement, see link below:

The push for divestment is changing the conversation about what “sustainability” means for college campuses. It is also generating a new, more critical and politically engaged cadre of climate activists. We use a shared auto-ethnographic approach from student activists’ and professors’ perspectives to analyze the campus divestment
movement based on the experience of American University’s Fossil Free AU campaign.

We argue that this issue is one where sustainability politics are re-politicized as they challenge traditional power relations and conceptualizations of what environmentalism entails. We explore how a climate justice framework, radical perspectives, and inside/outsider strategies were used within the campaign.
We argue that the campus fossil fuel divestment movement holds potential to change the university’s expressed values from complicity with fossil fuel economies toward an emergent paradigm of climate justice, stemming predominantly from student activism. The work presents new vantage points for understanding the relationship of personal experience, local campaigns of ecological resistance, and sustainability politics more broadly. 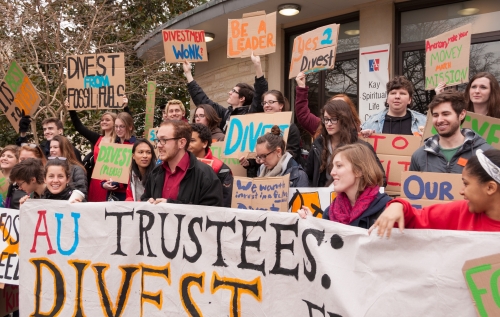